Journalists in Georgia and across the nation have been arrested or detained while covering recent protests. Learn about your rights and what to do during police encounters with a tips sheet prepared by the UGA School of Law First Amendment Clinic’s legal intern Jeffrey Murphy, law fellow Samantha Hamilton and Clinic Director Clare Norins, a Georgia First Amendment Foundation board member. 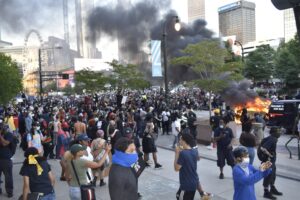 The tangle of quotes in Richard T. Griffiths’ hanging mobile, No Obstruction to Free Speech, is designed to give context to the current relationship between the press and the President. The artwork shows how tensions of today are nothing new, says Griffiths, president of the Georgia First Amendment Foundation and a retired journalist who oversaw CNN’s global editorial quality control for more than 20 years.

Griffiths created the 6-by-4-foot mobile from wood, lasered urethane, stainless steel and galvanized wire. The artwork displays quotes from every U.S. president, as well as from Founding Fathers and select quotes from Supreme Court justices. Their words illustrate how America’s leaders have respected the ways independent journalism and free expression contribute to the stability of our democracy.

No Obstruction to Free Speech will be auctioned at the Georgia First Amendment Foundation’s 2018 Weltner Award Banquet, happening the evening of Oct. 17 at the Silverbell Pavilion of the Emory Conference Center in Atlanta. The annual banquet is the foundation’s most important fundraiser, and proceeds from the auction will directly support our mission to protect and expand free speech and public access to government records, meetings and court proceedings in Georgia. (Tickets are now on sale.)

Griffiths’ mobiles are on display at the University of Georgia Grady College of Journalism and Mass Communication, the University of North Carolina School of Media and Journalism and private collections. No Obstruction to Free Speech was in part inspired by the tangle of coat hangers in Man Ray’s Dadaist work Obstruction that hangs in New York’s Metropolitan Museum of Art.

Our platinum sponsor CNN has pledged to match new member contributions — including membership fees — up to $5,000 before Dec. 31. So, you can multiply your support of the crucial open government and free speech work we do simply by joining now.

Memberships start at $50 for individuals and $100 for organizations. Benefits include open records and meetings training; legislative updates on key First Amendment issues; and connecting with other Georgia First Amendment Foundation members and supporters. Become a member today!

By Chris Dodd – One thing all Americans can agree on is the value of our freedoms. While we may sometimes take our Constitutional rights for granted, or differ on their precise interpretation, we can easily agree that the freedoms enshrined in the Constitution are fundamental to what makes our country what it is today.

The First Amendment right to free speech undergirds all other rights, and here at the Motion Picture Association of America (MPAA), we value and protect this freedom because it’s at the heart of everything we do. We take pride in our role protecting the rights of filmmakers to tell their stories – and for audiences to hear and see them.

Throughout its history, the film and television community has been a steadfast voice for free speech and expression. In fact, the MPAA was founded in 1922 to resist mounting calls for government censorship of films. While the nature of the fight has changed over the past century, our fight to promote and protect free speech continues unabated.

The Supreme Court has weighed in, referring to copyright to as the “engine of free expression.” But as the makers of great film and television continue to offer imaginative and innovative – often even controversial – storytelling, they still face threats to that basic freedom of expression today. There are some who seek to weaken copyright protections, to the detriment of creators. We will always fight on behalf of creators, and in support of free speech.

Last week, I was honored to accept the Georgia First Amendment Foundation’s Charles L. Weltner Freedom of Information Award on behalf of the MPAA for our efforts to strengthen free speech in the Peach State. I had the opportunity to travel to Atlanta and meet with local policy makers, journalists, lawyers, and industry professionals who share our passion for free speech.

Georgia has recently been a battleground in the fight to protect speech, and this year, we celebrate a major victory. Thanks to the efforts of Governor Nathan Deal and the state Legislature, Georgia has a new, improved anti-SLAPP statute that better protects the free speech rights of producers, writers, directors, actors, and other creative professionals – not to mention ordinary Georgia citizens who wish to speak out on public issues without the fear of facing ruinous lawsuits.

The new law makes it quicker, easier, and less expensive to have lawsuits that target the exercise of free speech dismissed. This will create a much more favorable legal environment for movie and TV production in Georgia.

Georgia First Amendment Foundation’s Executive Director Hollie Manheimer explained that MPAA was “instrumental in pushing for these free speech protections that benefit everyone in Georgia.” I am proud of our role in helping get the anti-SLAPP legislation over the goal line, and look forward to seeing continued growth in Georgia’s local film and television industry as a result.

The MPAA studios are strong supporters of anti-SLAPP laws, because they are frequent targets of lawsuits by people who don’t like how they are portrayed in movies and TV shows. Too frequently, these legal actions can have the effect of silencing creative voices, or at least making it more expensive and burdensome to tell stories about real people and events. Just think of all the great movies and TV shows audiences could lose out on absent these important legal protections.

Now, with further protections and fewer barriers, the film and television industry will be able to produce more films and shows in the state of Georgia, bringing in millions of dollars in revenue, and countless jobs to the area. This win for free speech is a win for every individual, family, business, and organization in the state.

My discussions in Georgia were particularly timely, as this week, we celebrate National Free Speech Week, an opportunity to recognize the importance of this freedom and recommit ourselves to protecting it. I encourage you to join the MPAA, and others, as we raise public awareness about the importance of free speech in our democracy – visit freespeechweek.org to learn more.

For more about the MPAA’s work to preserve free speech here.

For a full copy of Senator Dodd’s speech before the Georgia First Amendment Foundation, click here.

Join us Jan. 28 for a free legislative breakfast gathering with a panel of First Amendment experts to explore open government and transparency issues likely to emerge at this year’s General Assembly session. Top attorneys will be exploring a hots of issues, including the commercial use of drones, threats to the public’s rights to obtain criminal records, concerns about open records and identity fraud and how anti-SLAPP laws help protect free speech rights. Find out more here.