Q&A with Hollie Manheimer: Two decades of protecting the public’s right to know

Hollie Manheimer has been executive director of the Georgia First Amendment Foundation since January 1996. This month she’s stepping down from the post, although she’ll continue as a volunteer with the foundation. Join us as we celebrate her years of service on May 23 at an evening event in Midtown Atlanta.

Over the past two decades, Manheimer helped orchestrate the foundation’s successful efforts to expand citizens’ access to public meetings, proceedings and records. She conducted hundreds of open records and open meetings workshops for citizens, public officials, law enforcement officers and journalists around the state. And she wrote so many letters of inquiry to help Georgia citizens and journalists gain access to public information that she long ago lost count. She took a few minutes to talk about some highlights of her GFAF career. 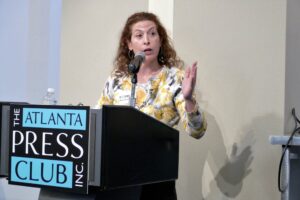 Q: You’ve been part of many open government successes in your years at the foundation. What’s something that stands out?

A: Creating the “Blue Book,” Georgia Law Enforcement and the Open Records Act, was a highlight of my career. It was a particular achievement because we were able to get everybody to come to the table. Just look at the list on the second page of the book (also listed on gfaf.org). Seven statewide law enforcement and prosecutorial agencies signed on. Their participation signals to local police that this is the law, and Georgia’s law enforcement leaders expect them to follow it.

Q: While you’ve helped many journalists gain access to public records and meetings over the years, you find citizen advocacy especially rewarding. Why?

A: Journalists have power. Citizens have power, too, but they may not know it. It’s very rewarding to help ordinary people understand that their government belongs to them. I want everyone to know that government information is our information.

Q: Do you think threats against First Amendment freedoms are larger today?

A: We’re talking about the First Amendment and government transparency more today, which is good. But the threats have always been there. The First Amendment is a set of rights that we constantly have to be vigilant about protecting. The reality is when people get enough power, they try to shield themselves from the oversight and scrutiny that’s provided for in the U.S. Constitution and spelled out in our laws.

Q: Do you see any areas for particular concern today?

A: Special interest groups — and not just the rich and connected people you imagine. It can be teachers, judges, anybody who wants to carve out exceptions for themselves in open government laws. Anytime anybody wants to curtail the Georgia Open Records Act, citizens should pay attention.

Q: Is there ever a moment when you think the work of advocating for government transparency will be complete?

Q: Talk a little more about the importance of that educational work.

A: We need more training for public officials and agency employees about laws that ensure access to public records, meetings and court proceedings, as well as about laws that protect free speech. A better baseline of understanding would reduce government conflicts with citizens and the legal actions that emerge from battles over access. Even if we disagree on interpretations of the law, if we all have a baseline understanding of it, that would be good for both citizens and public officials.

Q: If someone wants to better educate themselves on open government laws in Georgia, what should they do?

A: Read our “Red Book” on Georgia’s Sunshine Laws (A Citizen’s Guide to Open Government). Read our “Green Book” on public schools and open records, as well as the “Blue Book” on law enforcement that I mentioned before. File an open records request to obtain a document that interests you, and see how the process works. And, of course, join the Georgia First Amendment Foundation as a member.

A: I am dedicated to these issues and have devoted my entire adult life to them, so I’ll continue to work with the foundation as a volunteer. But I’ll increase my other work as a judge in the DeKalb County Magistrate Court. I love the First Amendment, so I will also continue my private law practice in that area and other areas of civil work. And I’ll also keep working on developing my water-skiing skills.