The Georgia First Amendment Foundation’s annual Legislative Breakfast is a public event held soon after the General Assembly convenes and state lawmakers get down to business. It provides an insider’s perspective on what’s happening under the Gold Dome — and how that might help or hurt your right to know. Public officials, newsmakers, First Amendment experts and members of the media join in a discussion of open government issues emerging as the legislative session unfolds. 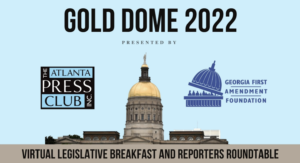 The free virtual event hosted by the Georgia First Amendment Foundation and the Atlanta Press Club drew more than 230 attendees. The event, which happened 8-9:30 a.m. on Jan. 27, 2022, began with elected officials and open government experts exploring how legislative proposals could help or hurt Georgians’ right to know what their state, county and city governments are doing. In the second half, journalists who cover the Capitol discussed legislative priorities and election-year politics.

Our virtual event on Thursday, Jan. 28, featured a robust discussion about how the pandemic, partisanship and limited transparency into the General Assembly’s business is eroding Georgians’ right to know. Wide-ranging topics included legislative proposals designed to increase public access to police records and video and to ensure government meetings are fully accessible in a virtual environment. We also got a behind-the-scenes view of what it’s like to be a lawmaker or a journalist working in this masks-required, socially distant legislative session.

Transparency implications of proposed legislation dominated the discussion at the Georgia First Amendment Foundation’s annual Legislative Breakfast on Jan. 23. The breakfast was held at the Georgia State University College of Law in downtown Atlanta. It was co-sponsored by student chapters of the American Constitution Society and the Black Law Students Association.

The lawmakers gave their take on the viability of these measures and offered behind-the-scenes perspectives on how business gets done under the Gold Dome. 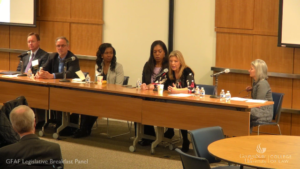 A panel of elected officials, First Amendment lawyers and a seasoned Gold Dome journalist weighed in on potential transparency threats emerging in the 2019 General Assembly session during the Georgia First Amendment Foundation’s annual Legislative Breakfast on Jan. 24. On the agenda: New rules for filing sexual harassment complaints against lawmakers. Big changes to Georgia’s voting system and a potential $150 million price tag. Eroding access to public school operations and performance. And a move to add visibility to the business operations of many hospitals. The lively discussion took place at the Georgia State University College of Law. Co-sponsors of the event were the GSU chapters of the National Lawyers Guild, the Black Law Student Association and the Latinx & Caribbean Law Student Association. First Amendment attorney and GFAF board member Cynthia Counts moderated the discussion. 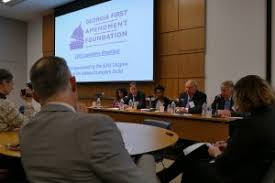 The Georgia First Amendment Foundation’s 2018 Legislative Breakfast on Feb. 1 at the Georgia State University College of Law drew a mix of First Amendment lawyers, reporters, law students, interested citizens and public officials. A panel of our board members and a lawmaker who sponsored legislation with government transparency implications led the discussion. Hot topics covered included a bill giving big lottery winners anonymity; how much state and local governments must disclose about tax incentives to win Amazon’s HQ2; and an elected official’s advice on how to get the public information you want. 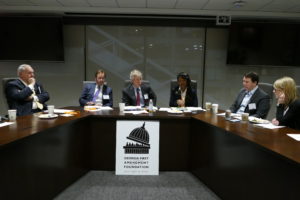 The Georgia First Amendment Foundation’s 2017 Legislative Breakfast on Jan. 26 at CNN drew a crowd of attendees interested in open government issues in the state. A panel of public officials, media representatives and First Amendment lawyers dove into hot topics, among them access to police body camera videos, judicial oversight, drones and privacy and citizens’ rights to public records.