In the 2021 General Assembly session, the foundation encouraged lawmakers to protect Georgians’ right to know.

The Georgia First Amendment Foundation believes our society functions best when the public has free and open access to information about what our government is doing. The General Assembly has codified this guiding principal in Georgia’s Sunshine Laws. In the 2021 General Assembly session, the foundation encouraged lawmakers to bolster these laws and increase transparency.

Some legislative actions strengthened our right to know. But many bills sought to weaken Georgians’ access to public information — and too many succeeded. See below for a list of bills that helped or harmed open government in Georgia.

The end of the legislative session does not mean an end to our outreach to lawmakers. As we look toward the 2022 General Assembly session, we’re encouraging lawmakers to consider limiting how long information obtained during an investigation into a complaint against a law enforcement or correctional officer or a law enforcement agency can be withheld from the public. We believe such records should be released at the earliest of either (1) when the investigation has concluded or (2) 180 days after the submission of the complaint that triggered the investigation.

Increasing transparency around police videos would mean greater accountability for law enforcement agencies and foster public confidence in our institutions. Throughout 2021, we will keep working to educate lawmakers, citizens and law enforcement stakeholders about the importance of transforming these ideals into law in Georgia. 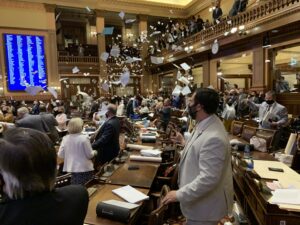 Here’s a recap of the bills the foundation tracked in the 2021 session:

These proposals had the power to strengthen government transparency and free speech.

House Bill 98/Senate Bill 95—Similar proposals filed in each chamber establish how and when public meetings and hearings may be held by teleconference in emergency and nonemergency conditions. The proposals would clarify aspects of the Georgia Open Meetings Act that have caused confusion and interfered with public comment during the pandemic. Activity: HB 98: 4/7/2021, House sent to Governor

HB 758—Applies the Georgia Open Records Act to the General Assembly, lifting exemptions lawmakers gave themselves when passing the law. The proposed legislation would require public access to records applicable to General Assembly business, including records of its committees, commissions and offices. Activity: 3/17/2021, House Second Readers

SB 129—Requires state and local law enforcement officers to be equipped with recording devices, starting Jan. 1, 2022, and makes video recordings of specified encounters between officers and the public accessible under the Georgia Open Records Act. Activity: 2/10/2021, Senate Read and Referred. Did not survive Crossover Day on March 8.

HB 279—Requires environmental impact reports be published by local governments on their official websites. This would give Georgians easier access to public information important to their local communities. Activity: 2/8/2021, House Second Readers. Did not survive Crossover Day.

HB 31—Exempts members of the General Assembly from paying fees to obtain state government records as part of their legislative duties or to perform constituent services. Activity: 11/24/2020, House Prefiled. Did not survive Crossover Day.

HB 167—Aims to increase Georgians’ access to public information. The language in this proposal should be fine-tuned to clarify penalties for Sunshine Law violations, support judicial enforcement of the laws and facilitate cooperation between the public and agencies from which they are requesting information. Activity: 2/1/2021, House Second Readers. Did not survive Crossover Day.

HB 402—Expands the definition of and protections for whistleblowers who report alleged government corruption. A whistleblower’s identity would be kept confidential unless the person consents to disclosure or the public agency determines disclosure is unavoidable during an investigation. If that happens, the whistleblower must be notified at least seven days before disclosure. Activity: 2/16/2021, House Second Readers. Did not survive Crossover Day.

These proposals had the potential to limit Georgians’ access to public meetings, proceedings and records or weaken free speech rights.

HB 134—Aims to exclude meetings relating to cybersecurity contracting and planning from Open Meetings Act requirements and exempt certain documents relating to cybersecurity plans and systems from the Open Records Act. The bill’s language is too broad, particularly regarding records, and could keep an array of government documents secret from the public. We suggest changing the bill’s language to narrow exemptions for meetings and documents to specific, well-defined cybersecurity purposes. Activity: 4/29/2021, Signed by Governor

Check out media coverage of HB 134: Experts say bills will make it easier for government to hide cyberattack details

HB 156—Requires government agencies, the military, utilities and other organizations to share information about cyberattacks and broadly excludes the public from meetings and data related to cybersecurity and cyberattacks. The bill would create a blanket exception to public transparency and greatly erode Georgians’ access to information about cybersecurity incidents that affect the public. Like HB 134, lawmakers could more narrowly define exemptions to protect the public’s right to know, while also safeguarding against cybercrimes. Activity: 3/25/2021, Signed by Governor

HB 289—The original intent of this bill was to detail requirements for Class C drivers’ licenses. On March 18, it was amended to add language from SB 171, which did not survive Crossover Day. (See below.) Now HB 289 has morphed into an expanded definition of “unlawful assembly.” It would increase potential charges and penalties for protestors, erode public employees’ free speech rights and institute other measures that would harm First Amendment protections for Georgians. Activity: 3/29/2021, Senate Tabled

HB 271—Allows community health boards to assess a fee to match federal payments for ambulance services, with the Georgia Department of Health authorized to audit fee payments. As written, this legislative proposal would exclude DPH audits and related records from the public. Current state law and court rulings support Georgians’ right to access information about how their tax dollars are spent on such services that private companies provide to government agencies in performance of public functions. Activity: 4/5/2021, House sent to Governor

SB 202—The sweeping election bill that changes rules for every voter statewide contains a provision that closes public access to certain hearings of the State Election Board. Activity: 3/25/2021, Signed by Governor

HB 168—Unlocks some Department of Corrections inmate documents now being shielded as “confidential state secrets.” But the proposal only would release this information to district attorneys responding to proposed actions of the Georgia Board of Pardons and Paroles — not to attorneys representing inmates or to the general public. Activity: 4/21/2021, Signed by Governor

SB 226—Requires local school boards to create a complaint-resolution process that could lead to banning books from school libraries based on complaints submitted by parents or guardians that material is “harmful to minors.” Activity: 3/31/2021, House Withdrawn, Recommitted

HB 573—Permits law enforcement officers to request that local tax assessors prevent public access to the officers’ tax assessment records. The proposal would reduce access to records regularly used by the public for property valuations and other purposes. It’s also unclear whether tax assessment records related to investment properties owned by law enforcement officers would be shielded by this proposed law. Activity: 2/23/2021, House Second Readers. Did not survive Crossover Day.

We watched these proposals because of their impact on the public’s right to know.

SB 34—Provides that victims of human trafficking may petition for a name change under court seal. Activity: 4/7/2021, Senate sent to Governor