The foundation presented GFAF co-founder Hyde Post with a Founder’s Award in recognition of his tireless service to the foundation and to the open government cause in Georgia and beyond.

The event also was a celebration of this year’s successes, including the publication of GFAF’s updated Red Book, Sunshine Laws: A Guide to Open Government in Georgia. 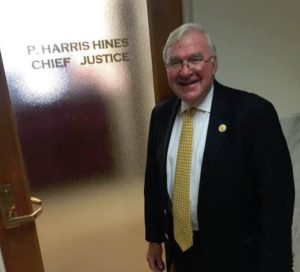 Atlanta high school students from Pace Academy contributed to the evening’s lively ambience by greeting guests and handing out nametags. The students’ attendance at the event represented a collaboration between the foundation and the private academy’s Isdell Center for Global Leadership. Sophomores selected to participate in the center’s new Fellows program pursue one of several co-curricular courses of study. Students in the Public Policy and International Relations cohort are exploring the First Amendment. Earlier this fall, Griffiths discussed freedom of the press at the school.

Discover more about the 2019 Weltner Banquet: 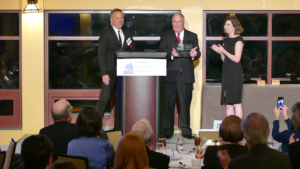 Cobb County Superior Court Senior Judge James Bodiford was honored with the 2018 Weltner Freedom of Information Award at the Georgia First Amendment Foundation’s annual Weltner Banquet on Oct. 17.  Bodiford, who was the keynote speaker, was recognized for repeatedly protecting the public’s right to courtroom access while presiding over some of Georgia’s highest-profile criminal cases.

The 2018 Weltner Banquet was one of the foundation’s most successful fundraisers ever, attracting more than 120 attendees, 11 event sponsors and pledges from donors that added up more than $136,000. It was a robust display of support for the foundation and our mission to protect and expand open government.

Two major donations were announced during the banquet. The Atlanta Journal-Constitution and Channel 2 Action News announced an $80,000 donation for open government training. The Department of Journalism at the University of Georgia’s Grady College of Journalism and Mass Communication announced a $10,000 donation through its William S. Morris Chair in News Strategy and Management to update and publish the foundation’s Red Book guide to Georgia’s Sunshine Laws. 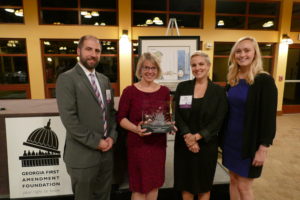 The Georgia First Amendment Foundation presented the 2017 Weltner Award to the Carter Center’s Global Access to Information Program. Program Director Laura Neuman, our keynote speaker, told attendees of our Oct. 19 banquet about how access to public information is transforming citizens’ lives worldwide. She was introduced by Carter Center Chief Executive Officer Mary Ann Peters, former U.S. ambassador to Bangladesh.We also honored the late Fulton County Superior Court Judge Stephanie B. Manis with our Open Government Hero Award. Manis, who died in December 2016, was an unwavering advocate of open records and open meetings and proceedings during her years in the Office of the Georgia Attorney General and on the bench. U.S. District Judge Mark Cohen offered a tribute to Manis, his longtime friend and former colleague.

The banquet took place at 6:30 p.m., Oct. 19, at the Silverbell Pavilion of the Emory Conference Center in Atlanta. Citizens, elected officials, journalists, judges, attorneys, members of the foundation’s board of directors and other First Amendment advocates were there to celebrate and support the foundation’s crucial and narrow mission. The Georgia First Amendment Foundation is the state’s only organization completely committed to the public’s right to know.

In 2016 the General Assembly passed the most effective legislative protection of free speech rights in Georgia in 20 years. It was a major First Amendment victory for Georgians, bolstering their right to comment on matters of public concern.

The Georgia First Amendment Foundation recognized the Motion Picture Association of America’s leadership role in building a coalition that helped persuade state lawmakers to strengthen free speech laws by naming the association as our recipient of the 2016 Charles L. Weltner Freedom of Information Award. 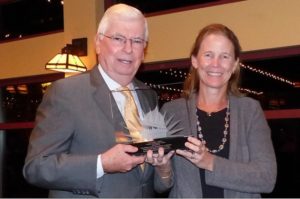 Former U.S. Senator and MPAA Chairman and Executive Officer Chris Dodd came to Atlanta on Oct. 13 to accept the award at the foundation’s annual Weltner Banquet.

“The MPAA is honored to receive the Georgia First Amendment Foundation’s Weltner Freedom of Information Award,” Dodd said. “We are proud of our longstanding commitment to promoting First Amendment freedoms. We consistently resist calls for government censorship and work every single day to protect filmmakers’ rights to tell their stories. Georgia’s new, stronger free speech law safeguards those rights.”

The Motion Picture Association’s work under the Gold Dome led to increased legal protections against so-called strategic lawsuits against public participation, or SLAPPs. The result: Deep-pocketed plaintiffs now have a much tougher time sustaining groundless defamation and other claims designed to chill free speech in Georgia.

The dinner was held in the Silverbell Pavilion at the Emory Conference Center.

Olens pursued changes to Georgia’s Open Records and Meetings Acts designed to enhance the ability of Georgia citizens to access public records and public government gatherings. Among other enhancements, the changes strengthened enforcement provisions of the acts. And after the law was updated, Olens used those provisions to successfully sue violators.