Zoe Bambara’s determination to speak up about injustice turned her, at age 19, into a community organizer and activist. She understood her First Amendment right to peaceful protest, although she had to learn the logistics of how to get demonstrators into the streets safely and legally. She was a quick study.

Over three days, using community connections and social media, Bambara put together what became Atlanta’s first large Black Lives Matter protest of 2020, drawing thousands of people to downtown Atlanta on May 29 to march from Centennial Olympic Park to the Capitol to decry the senseless killings of Black women and men across America. It launched a local movement that continues to spark change. Two months after that first large protest in Atlanta, Georgia’s first hate crimes law took effect. Bambara, a freshman at Morris Brown College, says her work has only just begun. 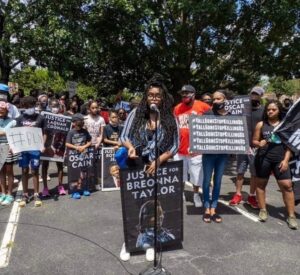 Q: Why did you decide to organize the protest on May 29? What was the catalyst?

A: It’s representation that really matters to me. And I wasn’t seeing a lot of marches that were dedicated to Breonna Taylor. Back in May, her name wasn’t really out there like it is now. Thank God that it’s out there now. The May 29 march was for Breonna Taylor because nobody knew her name like they should have. And [Taylor’s shooting death in March during a police raid of her apartment in Louisville, Kentucky] had happened two months prior. It was very important to me. I always stick up for Black women.

Q: How did you figure out the right way to organize a protest?

A: My mom, honestly. I was like, ‘Mom, can you help me out? Do you know who I should talk to?’ Atlanta is so small that everybody knows somebody. My mom has this group of girlfriends. They’ve known each other since they were about 12. And one of them, I call her my aunt, she works for the city. My mom told me to call her, and I did, and she said, ‘Oh, yeah, you need a permit. Call the mayor’s office.’ And then I just tried to figure it out. My mom, she walked me through everything. Three other people I know helped organize. I had my mom, and my mom knew what she was talking about. Of course, social media helped, as well.

Q: Protests were already taking place in other cities. Did you learn from those demonstrations?

A: Just seeing how everything was happening over the course of a few years, seeing what happened in Ferguson [Missouri] and what was happening in Portland and all these different cities, I learned and adapted. I thought, OK, I know we need water. We might need first-aid kits. I was calling everybody.

A: I’m so out of shape. So, we were walking, and I was lagging. I looked ahead of us. And then I looked behind us. I was like, ‘Oh, my God,’ because there were people already at the Capitol, and there were still mountains of people behind us. And then my cousin texted me, and was like, ‘It’s on the news, and they say that there’s 5,000 people out there!’ Then it hit me, and I cried. It was more out of relief, because I literally didn’t sleep for two to three days. I just wanted to make sure I did it right. I just wanted to make sure that I followed all rules and laws and guidelines to make sure that nobody, you know, got hurt or anything like that. So, I was stressed out for those three days. But when I saw how peaceful it was, and how it was portrayed, I was very, very proud.

Q: Is there a history of activism in your family?

was an activist. She called herself a cultural worker and a community organizer, and she was a writer. She was a professor at Spelman College. She focused on the issue of roles when it came to Black women in the civil rights movement. Pretty much in every revolution, Black women are on the front lines.

A: I think this is definitely going to be my purpose. I love waking up in the morning and doing this. It’s kind of hard being as young as I am because people don’t really want to take me seriously. They tell me that people in this movement come and go. But I’m not budging.