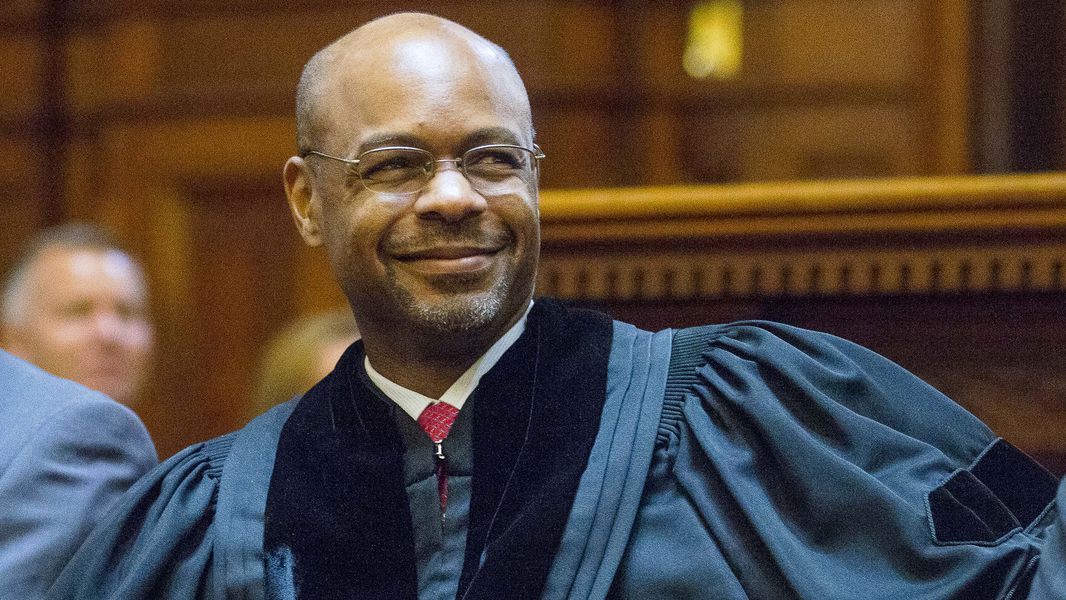 Justices’ foresight in creating a pandemic plan has kept Georgia courts operational and accessible to the public during COVID-19. We applaud the Georgia Supreme Court’s leadership at our 2020 Weltner event, happening online Oct. 15.

Across the country courts have struggled with accommodating public access to court proceedings during the pandemic, but not the Supreme Court of Georgia.

Over a decade ago when then Chief Justice Leah Ward Sears handed junior Justice Harold D. Melton the assignment to come up with a pandemic plan for Georgia’s courts, he admits he was skeptical.

“You know, anybody who is doing work, anything on a daily basis, can think of things that they need to be doing instead of planning for something that may or may not happen,” Melton recalled.

But his views changed when he started working on the pandemic plan.

In 2009, Melton and a volunteer group of lawyers and public health experts completed a 177-page Georgia Pandemic Influenza Bench Guide, updated and revised in 2018, that, this spring, allowed now Chief Justice Melton to act with speed and clarity in response to the COVID-19 coronavirus pandemic.

“When the pandemic hit, there was a great deal of panic initially, and it was immeasurably comforting to know that there had been some intentional thought and planning that had taken place out of the panic mode,” Melton said. “It got us going until we could get our COVID sea legs underneath us.”

And that time and planning has allowed the Court to preserve and protect public transparency.  In every emergency order and extension issued since March, Melton and the Court have worked hard to keep Georgia’s courts open and accessible virtually during the COVID-19 emergency, not just for judges, lawyers and litigants, but also for journalists and the public. In contrast to those of other states, the Georgia Supreme Court’s orders permitting judicial business to proceed online have been carefully written to ensure that the public is afforded notice and an opportunity to attend.

More than 40 years ago, the Georgia Supreme Court made the state one of the first in the country to permit cameras in its courtrooms.  Then Chief Justice H.E. Nichols reasoned, “Our courts don’t belong to our judges or our lawyers or our litigants. They belong to the people.”

And the Court has reinforced that view in the years since with strong reversals of lower court decisions that sought to close court proceedings and records. “Like a candle,” the Court has said, “court records hidden under a bushel make scant contribution to their purpose.” “This court,” it has explained, “has sought to open the doors of Georgia’s courtrooms to the public and to attract public interest in all courtroom proceedings because it is believed that open courtrooms are a sine qua nonof an effective and respected judicial system which, in turn, is one of the principal cornerstones of a free society.”

Melton channeled this long-standing policy and sentiment this spring by ensuring that as Georgia courts moved to virtual proceedings, the public moved with them. He’s grateful Georgia was prepared, especially because he can recall thinking that the pandemic plan he worked on a decade ago was unlikely to be needed. Melton modestly admits the experience has taught him a valuable lesson.

“I still wonder if I had been in the [then] chief’s spot, would I have taken the initiative to create this commission to plan ahead? And I don’t know that I would have,” Melton said. “I do think it is good for public officials to think about the things that you hope don’t happen.”

The Georgia First Amendment Foundation and its annual Weltner Freedom of Information event are dedicated to applauding those whose work has demonstrated the importance and power of First Amendment principles foundational to our democracy, especially in this unparalleled year.

The Georgia Supreme Court certainly fits that description and will be honored at this year’s Oct. 15 virtual Weltner event as a First Amendment Hero. Unlike a number of other courts across the country, which have found protecting public access now too difficult, the Court has continued to honor in deed the constitutional command recognized by the event’s namesake, the late Chief Justice Charles Weltner, “Because public men and women are amenable ‘at all times’ to the people, they must conduct the public’s business out in the open.”

Peter Canfield is a founding board member and Richard T. Griffiths is president emeritus of the Georgia First Amendment Foundation.