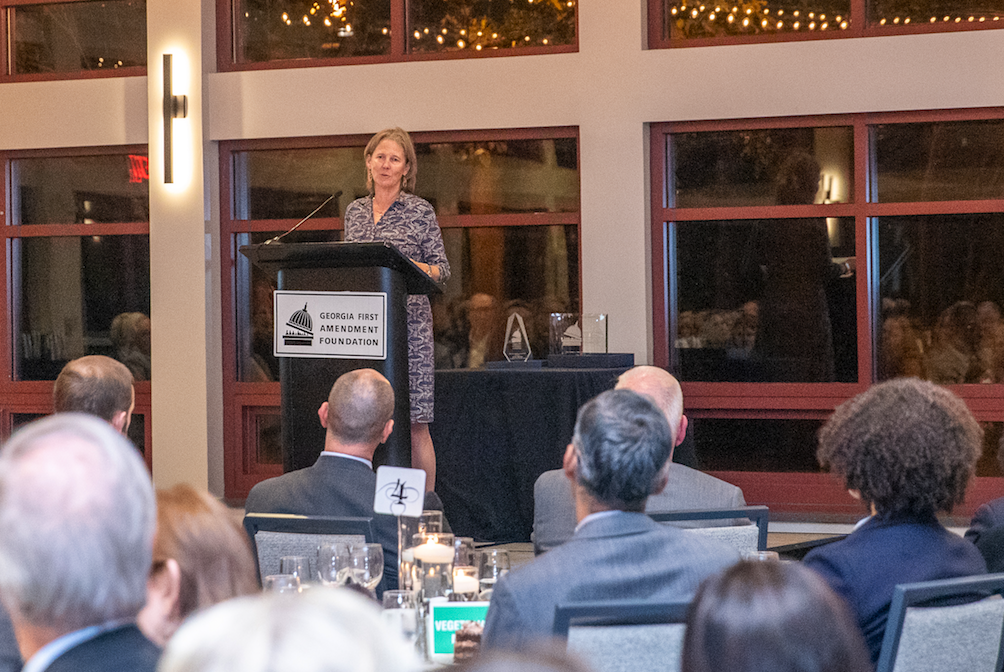 During the Georgia First Amendment Foundation’s 2022 Weltner Banquet, Susan Weltner Yow paid tribute to her late father’s commitment to government of the people. Here are her remarks, given on Oct. 27, 2022, to banquet attendees at the Emory Conference Center in Atlanta. (Photo/Jenni Girtman)

It’s hard to believe that it’s been 30 years since my father Charles Weltner died. He battled cancer for several years before his death, and for a time, the cancer was in remission. But, in July 1992, his cancer came roaring back, and it was terminal. When my father learned this terrible news, he undertook some very intentional acts.

First, he called many people, to say goodbye and to thank them for being his friend.

And he worked on his concurring opinion in Davis et al. v. City of Macon.

My understanding is that Davis was a run-of-the-mill case, and the Georgia Supreme Court unanimously affirmed the lower court opinion without opinion. But it was also the last appeal that my father participated in, and so he used this case to write his final opinion, his final public words.

I reread the Davis opinion this week and was really struck by something. Of all the causes that Charles Weltner championed during his life as a lawyer, a 5th District congressman, a judge, a justice, a scholar, and a writer, he decided that his final message should highlight the critical importance of government accountability and transparency. In his concurring opinion, he wrote, “Public men and women, above all others, must act in good faith…Because public men and women are amenable ‘at all times’ to the people, they must conduct the public’s business out in the open.” That was his final message to the world.

And so, my father would be so grateful that so many of you heeded his message. He would thank all the awardees of the Weltner Freedom of Information Award and all the Georgia First Amendment Foundation Open Government Heroes. He would applaud all of you — newspeople, judges, lawyers, teachers — who strive tirelessly to breathe life into the critical words of the Georgia Constitution: “Public officers are the trustees and servants of the people and are at all times amenable to them.”