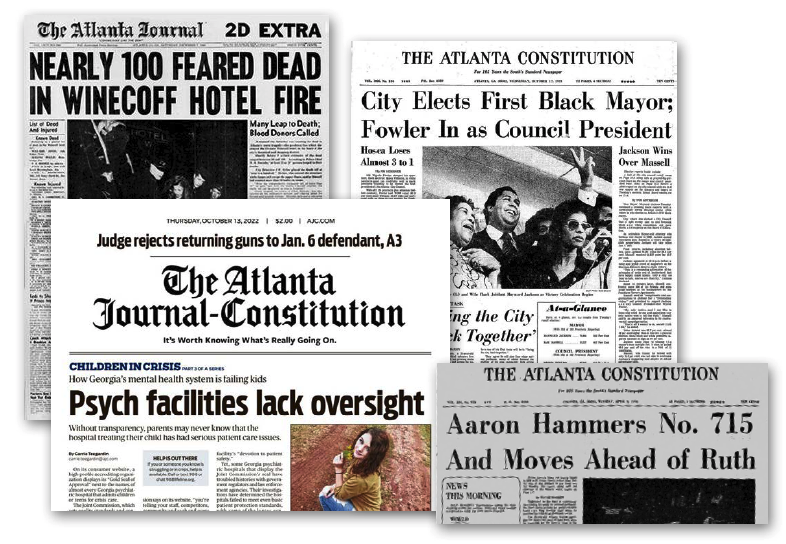 Change has been a constant in the more than eight decades since James M. Cox purchased The Atlanta Journal, expanding his media reach beyond Ohio roots.

“I wouldn’t know of another property in America I would want outside of this one,” the former Ohio governor wrote to a friend about his acquisition of The Journal in 1939, according to the New Georgia Encyclopedia. “The town is progressing more than any city in the South.”

Cox’s investment in Atlanta, which included WSB Radio, spurred decades of growth and innovation for what ultimately would become one of America’s largest family-owned companies. In 1948, Cox’s WSB-TV became the first station in the South to air a live commercial television broadcast. It took tremendous commitment; the cost of one television camera was said to be the same as the cost of putting an entire radio station on the air. In 1950, Cox bought The Atlanta Constitution, adding a morning daily to its news portfolio. The company expanded into other areas, becoming an early entrant into cable television and later diversifying its business to include the automotive, clean technology and health care sectors.

As Cox grew, so did Atlanta. Indeed, Georgia’s progress has been shaped by the news that Cox-employed reporters, editors, photo journalists, columnists and cartoonists have brought to the state’s residents every day since 1939.

World wars, societal shifts, technological transformations and competitive battles only increased the family’s commitment to delivering news that Georgians can trust and to advocating for the type of open government that enables newsgathering and underpins democracy. 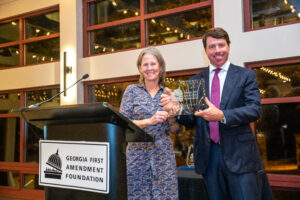 That commitment is why the Georgia First Amendment Foundation has honored the Cox family with our 2022 Charles L. Weltner Freedom of Information Award. The award was accepted at the foundation’s 20th Weltner Banquet on Oct. 27, 2022, by Cox Enterprises Chairman and Chief Executive Officer Alex Taylor, great-grandson of James M. Cox.

“Amenable ‘at all times’ to the people”

Susan Weltner Yow prefaced her presentation of the award to Taylor with a remembrance of her father, the late Georgia Supreme Court Chief Justice Charles L. Weltner, for whom our award is named. She said her ailing father chose to make the 1992 opinion in Davis et al v. City of Macon the last of his career because it reflected his commitment to government of the people. His opinion read: “Because public men and women are amenable ‘at all times’ to the people, they must conduct the public’s business out in the open.”

Taylor delivered a keynote speech in which he said First Amendment freedoms are essential to the American way of life and shared stories about the launch and evolution of the Cox family’s news business. “I’m just very proud of my family and the things that they’ve done, and I feel like I get the opportunity to stand on their shoulders,” he said.

Jane Hansen, a former Atlanta Journal-Constitution journalist and recently retired public information officer for the Supreme Court of Georgia, was recognized as an Open Government Hero for her work supporting court access and her impactful investigative reporting.

Former Georgia Supreme Court Chief Justice Leah Ward Sears introduced Hansen in remarks rich with anecdotes from Hansen’s reporting career exposing wrongdoing and covering sensational murder trials, as well as stories from her days as Court PIO, when she wrote captivating case summaries that made the sometime opaque business of the court understandable to everyone.

Hansen received a standing ovation from the crowd of journalists, jurists, public officials, attorneys and First Amendment advocates gathered at the banquet, which took place at the Emory Conference Center in Atlanta. 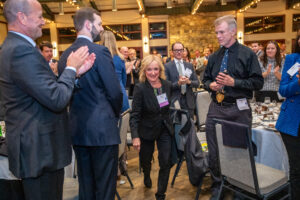 Hansen is one of many Cox journalists whose reporting has benefited Georgians. At the AJC, her investigations into the deaths of children under state agency protection led to new laws designed to hold child welfare officials accountable and lift the veil of secrecy surrounding tragedies happening under their care. (Read Hansen’s AJC series, “Suffer the Children.”)

Pushing for transparency and accountability

Lawsuits funded by Cox have established legal precedents that ensure hospital accreditation reports are open to the public; prevent universities from hiring presidents without public review; provide taxpayers more insight into how officials are using their tax dollars to woo businesses; and make it harder to cover up the failings of institutions charged with protecting Georgia’s most vulnerable citizens. Cox continues to advocate for the public’s right to know and freedom of the press through support of the annual Georgia Bar, Media & Judiciary Conference, the Atlanta Press Club and the Georgia News Lab for student investigative journalism. The company also is a supporter of the emerging Georgia News Collaborative, an organization of alternative and traditional news outlets seeking to sustain strong journalism in communities throughout the state.

Earlier this year, Cox purchased Axios, a national digital news outlet, with plans to expand its local coverage to more U.S. cities. Meanwhile, the family-owned company continues to invest in the evolution of its flagship news outlet, the AJC.

For 82 years, the Cox family’s enthusiasm for trustworthy local journalism and the public’s right to know has not wavered. The foundation is pleased to recognize and celebrate the family’s positive impact on Georgia.

FIGHTING FOR THE PUBLIC’S RIGHT TO KNOW

Through award-winning newsgathering and reporting, persuasive editorial commentary and significant financial support, Cox Enterprises and the Cox family have played a vital role in expanding transparency in government. Employing strategic litigation where necessary, they have led the way in pushing for the protection and expansion of Georgia’s open records and meeting laws and public access to court records and proceedings. Here are some highlights.

1975: Cox took a Fulton County case all the way to the U.S. Supreme Court to first establish that journalists cannot be sued for invasion of privacy for accurately reporting information found in public court records. The case is now one of the foundations of First Amendment law.

1986: WSB-TV successfully challenged in the U.S. Court of Appeals a local sheriff’s ongoing effort to thwart or impede the station in gathering and reporting news relating to rumors of the sheriff’s use of inmate labor on his private property.

1988: The AJC successfully opposed a religious order’s attempt to seal all records in a lawsuit accusing the church of misconduct. In a landmark ruling, the Georgia Supreme Court declared that “our system abhors star chamber proceedings with good reason.” The Court held that like “a candle … court records hidden under a bushel make scant contribution to their purpose” and may be shielded from
public scrutiny only upon a showing of “clear necessity.”

1990: The AJC successfully sued head coaches at public universities in Georgia to force disclosure of hundreds of thousands of dollars in payments they personally received for shoe contracts and other endorsements.

1994: Cox provided seed money and other support for the newly formed Georgia First Amendment Foundation, helping to launch our organization as the only one in the state fully dedicated to
protecting and expanding the public’s right to know. Over the years, Cox has re-upped support to sustain the foundation’s mission.

2005: The Metro Atlanta Chamber and Central Atlanta Progress sought to lure the NASCAR Hall of Fame and the 2009 Super Bowl to Atlanta — and claimed their city- and state-supported bids were not public. The AJC and Georgia’s attorney general successfully sued for disclosure, establishing that public agencies cannot use private organizations to conceal the public’s business.

2012: When the Georgia General Assembly rewrote the state’s Sunshine Laws, Cox advocated for greater public access to government records and meetings. The improvements made our laws more comprehensive and more applicable to the modern day. For example, the revised laws detailed how to hold technology-enabled remote meetings that also would be accessible to the public; that proved hugely beneficial when governments across Georgia rapidly shifted to online meetings in 2020 because of the COVID-19 pandemic.

2018: When City of Atlanta officials attempted to hide public records, WSB and the AJC pushed back, paving the way for what became the state’s first criminal prosecution for a violation of the Georgia Open Records Act. Cox devoted money from a related legal settlement to support open government training of government officials, journalists, lawyers and members of the public statewide.

Discover more about the 2022 Weltner Banquet, including photos, the program and more.