Georgians navigating the COVID-19 coronavirus crisis are adapting almost every aspect of their lives to the new normal of physical separation. Social distancing is also affecting how government officials and agencies meet to make decisions and how they enable public access to meetings and records.

A Transparency Town Hall hosted by the Georgia First Amendment Foundation on March 23 explored these issues. A panel of experts offered guidance for how to balance governments’ need to act quickly and the public’s right to know in these unprecedented times. On the panel:

The Q&A below contains edited excerpts. Watch a video of the town hall to hear the full discussion. Refer to Sunshine Laws: A Guide to Open Government in Georgia for guidance on transparency laws in regular and emergency situations. 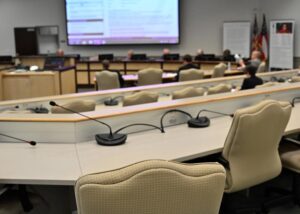 Courtesy of the AJC

The following information is intended merely as guidance and does not constitute legal advice.

Are public meetings conducted via video conference and teleconference considered open under Georgia law? And what about other channels like Facebook Live and public access TV?

Yes. For a meeting to be open under the law when in-person meetings aren’t feasible, the public should be able to watch a live video broadcast via television; watch a live video feed on their computers; listen live via their computers; or dial in via telephone. The telephone dial-in is important in areas where broadband access is limited or for citizens who don’t have computers. (Check out virtual meeting tips and resources.)

Is it acceptable under the law if every government official is in a different place for a virtual meeting? Is that still a legal meeting?

If a local government body holds a meeting without public attendance, records it, and posts the recorded meeting later, does that comply with the state’s Open Meetings Law?

No. That is not equivalent to giving people the ability to watch or listen to a meeting while it is happening.

The Open Meetings Act requires officials to move an overflowing in-person meeting to a larger room. Does that same requirement apply to virtual meetings? Does a local government have to expand their teleconference capabilities, for example, if many people want to dial in or log in to a public meeting?

Officials have to do their best to make a good-faith effort to open the meeting to as many people as possible. Agencies should anticipate a surge in public interest right now; more people may want to virtually attend a meeting than normally would attend a regular, in-person meeting. A video conference, a teleconference, or both are acceptable under the law. (Learn more about free or low-cost virtual meeting technologies.)

Do you have to have a quorum for a public meeting conducted via video or telecom conference to be legal?

Yes, you still have to have a quorum.

If public officials decide to meet in person, can they keep a member of the public or media from attending the meeting?

What does the law say about posting notifications of public meetings during a crisis?

All of the same notice requirements that normally apply to in-person meetings still apply now. Officials should still go through the existing process of putting a notice with virtual meeting dial-in or login details in the legal organ; posting on agency websites; hanging up signs with meeting information on the front doors of public buildings where meetings normally take place; etc.

Other states are amending or suspending some aspects of their open meetings and open records laws. Why isn’t that happening in Georgia?

Georgia’s Open Meetings Act and Open Records Act both have provisions for emergency situations. The Open Meetings Act allows any government agency to hold meetings telephonically or virtually in an emergency. See O.C.G.A. § 50-14-1(g). The Open Records Act allows public agencies to take longer than three business days to provide records, if the records cannot be provided within that time.  See O.C.G.A. § 50-18-71(b)(1)(A). The agency must tell a requester within three business days when they will be able to produce records. Agencies should explain to the requester how the emergency situation is contributing to any delay in the availability of records.

Are agencies going to get into trouble if, during this crisis, they can’t produce records in the standard three-day period defined by the Open Records Act?

When agencies have the ability to respond to a request within the three-day timeframe, they should do it. For example, if agency staffers working from home have access to servers with agency records, they should comply with requests, as the law requires.

But less technologically enabled agencies may need more time. For example, in a small town that keeps records that cannot be accessed remotely, the city clerk could go into the office one day a week, with limited interaction with other people and appropriate social distancing, in order to respond to records request. The Open Records Act allows an agency to give a requestor a reasonable amount of time for a record to be produced in emergency situations. The agency must respond to the request within three business days of receipt, but officials can tell the requester that it will take a certain number of days to comply under current circumstances.

Will journalists in Georgia still be able to go into communities to do reporting, even under a stay-at-home order?

Gov. Brian Kemp’s shelter-in-place order, effective April 3-13, was accompanied by a handout that defines as critical infrastructure: “Workers who support radio, television, and media service, including, but not limited to front-line news reporters, studio, and technicians for newsgathering, and reporting, and publishing news.” In other states that have implemented shelter-in-place orders, newsgathering by journalists also has been designated as an essential service. That’s consistent with past emergencies. In hurricanes, tornadoes and times of war, for example, the media has been allowed to continue working to keep the public informed because there’s an understanding by officials that people need as much reliable information as possible. [Updated April 3, 2020]

What can governments do to ensure information gets shared with the media so it can be widely reported to the public?

Daily or twice-daily media briefings are very helpful. It’s also important for reporters to have the opportunity to ask questions during these briefings and to contact officials at other times to clarify information and get more details. The shared goal for local governments and local media should be to keep citizens in their communities informed.

Can local governments address non-emergency business when operating under emergency provisions as defined in the Open Meetings Act?

Potentially, but proceed with caution. For emergency meetings that can be called less than 24 hours in advance, the law requires that the meeting be only about the emergency and not used as an opportunity to get other business done. In other meetings that are held telephonically or virtually because of the emergency, the Open Meetings Act does not restrict the business that can be addressed. But even during regularly scheduled meetings, emergency preparation and response should be the priority right now.

If officials in a regularly scheduled meeting cover all of their coronavirus-related business and have time to address other matters, that may be acceptable. But local governments should be cautious and judicious about conducting non-emergency business — especially business like zoning, where public comment is key — at a time when public participation in meetings may be reduced by the crisis.

Does the federal law restricting release of medical information — the Health Insurance Portability and Accountability Act, or HIPAA — restrict state and local governments in Georgia from providing information about the coronavirus outbreak?

No. The U.S. Department of Health and Human Services (HHS) has indicated that protecting the public outweighs protecting privacy of individual patients. So, if there is a need to disseminate information to protect other people, that is allowed under HIPAA. Officials should be cautious about providing an infected person’s name or other identifying details. But it is allowed under HIPAA, for example, to say a jail inmate or a government employee or a member of the public who attended a public gathering has tested positive for COVID-19 because that information can protect the health of other people. (See recent HHS guidance about HIPAA and COVID-19.)

If a government building is closed to the public, can officials deny a request from someone who wants to inspect public records?

Agencies can delay producing records, per the Open Records Act, but they should make a good-faith effort to comply with the request, especially if public buildings that house records remain closed for an extended time. For example, one agency employee might come in to retrieve the records, place them on a table, and allow the requester to come in to review the records. Agencies are going to have to come up with these kinds of solutions as the emergency extends.

Georgia emergency management statutes say that during an emergency, powers and functions of government can be exercised without regard to time-consuming procedures otherwise prescribed by law. How does that provision align with open meetings and open records requirements?

If officials think an agency is not going to be able to comply with the Open Meetings Act or the Open Records Act, their first priority should be making sure that the community can watch or listen to meetings and get access to as much information as possible to know what’s going on.

The important thing in a crisis is that people know what their government is doing, especially at the local level. People may be more likely to listen to their mayor telling them to stop gathering in groups than to similar advice coming from state or federal agencies. The most important thing is that citizens have access to meetings and information so they can know what’s going on, even if an agency isn’t able to do everything by the book.

What should citizens or public officials do if they believe local elected officials or agencies are violating state transparency laws during this crisis?

Contact the Georgia Department of Law’s Open Government Mediation Program to report problems. Staff can reach out to officials to find out what’s happening; ask if they need help understanding or complying with the law; and direct them to groups that have resources to help local governments, like the Georgia Municipal Association and the Association of County Commissioners of Georgia.

The questions below were submitted to the Georgia First Amendment Foundation separate from the Transparency Town Hall:

How should governments allow for public comment when meetings are virtual? What does the law require? What are best practices?

If public comment is required during a meeting, the agency must continue to allow for public comment. There are a variety of ways to accomplish this in virtual meetings. Agencies can have the public submit comments by email prior to the meeting and then read the comments aloud during the meeting. When holding meetings by telephone, an agency could mute members of the public during regular business and then unmute them to allow for public comment. When holding meetings using an online interface, such as Zoom, WebEx or Facebook/YouTube livestreams, an agency can ask the public to comment in the chat or other comment functions and then read those comments aloud or unmute the citizen and have them communicate their comment.

The Georgia First Amendment Foundation has published tips for keeping virtual government meetings open, as well as a list of technology resources. Do you have more questions about government transparency amid the coronavirus crisis? Email us at info@gfaf.org.