Cobb County Superior Court Senior Judge James Bodiford has earned a reputation for protecting the public’s right to courtroom access while presiding over some of Georgia’s highest-profile criminal cases. Rather than restrict the public and media from attending those trials, Bodiford made provisions to keep the proceedings open — and maintained an orderly courtroom. He encourages other judges to open their courtrooms, as well, arguing that our judicial system works best when it’s accessible and transparent to citizens. 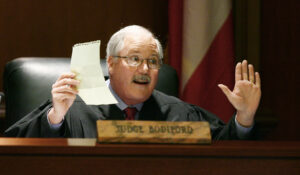 The open-courts commitment Bodiford has upheld over his more than 30-year career is why the Georgia First Amendment Foundation is honoring him with our 2018 Charles L. Weltner Freedom of Information Award. Bodiford will receive the award at the foundation’s annual Weltner Banquet at 6:30 p.m., Oct. 17, at the Silverbell Pavilion of the Emory Conference Center in Atlanta.

A prime example of Bodiford’s dedication to courtroom access was the State of Georgia v. Ray Brent Marsh. In 2002, a tip led investigators to a northwest Georgia crematory where 334 corpses were discovered. Marsh, the crematory operator, was charged, and a local judge immediately entered a sweeping gag order that created chaos. Hundreds of families from three states were desperate for information about the remains of their loved ones, and people across the country closely followed the case.

The gag order left the Georgia Bureau of Investigation unable to provide basic information to families and the public. Bodiford was asked to take control of the case, and one of his first acts was to announce that he would be handling it in an open way, giving law enforcement and the media the latitude needed to keep the public informed. National, state and local media reported on every hearing. The public had full visibility into the legal process, which ultimately resulted in a plea that sent Marsh to prison.

Bodiford stayed true to these First Amendment principles in other high-profile cases, as well, including the murder trials of courthouse shooter Brian Nichols; Lynn Turner, who poisoned her husband with anti-freeze; and Fred Tokars, a one-time Atlanta lawyer and prosecutor who had his wife executed by a hit man in front of his young children. Bodiford kept proceedings open, gavel to gavel, amid constant media coverage. As the jury heard evidence, so did the public — a demonstration of the power of open courtrooms.

Bodiford’s record reflects an understanding of how modern media coverage provides a tremendous opportunity for the judiciary to make court proceedings more accessible and understandable to citizens. Even under the harsh scrutiny of high-profile trials, his commitment to transparency has not wavered.

A Cobb County native, Bodiford stepped down from daily trial work in 2014 and began serving as a senior judge. In addition to educating Georgia judges about the importance of courtroom access, he has traveled to Estonia, Bosnia and the Republic of Georgia to teach judges in those countries about how the American justice system works.