Next open government training May 15 at Atlanta Press Club

A Decatur County lawman laments the time he spends redacting police body-camera video to protect the privacy of children and other bystanders. A newly elected Georgia mayor wonders why personnel records are available to the public. And at a gathering of public information officers, many want to know if they should archive local government social media posts.

These are the government transparency issues public officials and the people they represent are asking, and the Georgia First Amendment Foundation is helping cut through the complexities during statewide travels this year. We’re delivering training on Georgia’s open records and open meetings laws and promoting the benefits of government transparency as public information goes increasingly digital.

Want to attend one of our training sessions? Join us for Government Transparency in Georgia: What You Need to Know on May 15, an event in partnership with the Atlanta Press Club. It’s free and open to all who register.

From Athens to Tifton, Atlanta to Savannah and about a dozen other stops in between, GFAF board members are handing out our signature guides to open government and encouraging a spirit of cooperation among government officials, the public and journalists. Our ramped up efforts this year are made possible in large part through a Cox Media Group grant provided to the foundation last fall.

Our board members also have given open government presentations this year at the University of Georgia, Augusta University and Georgia State University College of Law. We’ve talked to records custodians from a local chapter of the American Records Management Association and to lawyers at gatherings held by the State Bar of Georgia and county bar associations. 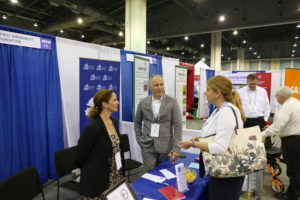 At the Association County Commissioners of Georgia annual conference in Savannah in late April, we answered commissioners’ questions, handed out our open government guides and promoted our training at a booth tucked between vendors Radarsign and Georgia Safe Sidewalks.

Participating in the county commissioner conference put us in front of 700 attendees, a large audience filled with the elected officials we want to reach with our open government message and educational opportunities. In June, we’ll provide open meetings training and staff a booth at the Georgia Municipal Association Annual Convention, which anticipates attendance from as many as 2,400 city officials from across Georgia.

We also have this year’s Georgia Press Association annual conference and the Georgia Association of Broadcasters annual convention on our calendar. And we’re sponsoring events in partnership with the Atlanta Press Club—supporting the groups that also support our First Amendment mission.

Our training is provided by First Amendment attorneys and seasoned journalists who serve on our board or committees. You are welcome to request a training session for your group, and we’ll do our best to accommodate.