More than 50 organizations signed on to support the statement, which urges states to enact reforms opening every aspect of the police misconduct oversight process to public scrutiny. The call to action is a response to the killing of George Floyd by a Minneapolis police officer and the unrest that has erupted around the nation. The officer charged in Floyd’s death had multiple complaints filed against him.

While a police officer’s disciplinary history is generally available in Georgia (see GFAF’s Red Book and Blue Book covering relevant Georgia laws), such records are effectively confidential in almost half of U.S. states. 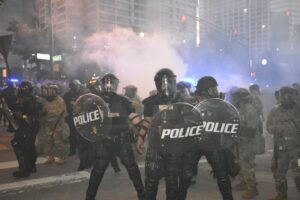 As protestors across the country push for reforms, several states and municipalities have moved to enact legislation surrounding police transparency beyond public records. For example, New York and Colorado legislatures have advanced sweeping police reform measures.

The Georgia General Assembly resumed the 2020 legislative session on June 15, and pressure is mounting for lawmakers to pass a hate crimes law and take action on police reforms in response to the killing of Ahmaud Arbery, a black man who was shot during a confrontation with a white father and son near Brunswick. Arbery was killed in February; two months passed before police made an arrest.

The foundation believes legislators can take further steps to increase fairness and accountability in law enforcement in our state. Both Floyd’s and Arbery’s deaths were captured on video. The Georgia First Amendment Foundation encourages Georgia lawmakers to make all police body, dashboard and drone camera video in use-of-force complaints and investigations immediately available and easily accessible to the public. Such action would move us closer to the increased public oversight of law enforcement that we so desperately need.

Greater transparency leads to better policing. And that leads to better public safety and stronger communities. Immediate reforms in Georgia and across the country would be a beginning to remedying the secrecy in our criminal justice system that erodes public trust.

Check out GFAF’s Legislative Watch for more perspectives on the General Assembly session.