“Tom was truly one of the founders of the Georgia First Amendment Foundation,” said Hyde Post, founding president of GFAF in 1994 and a current board member. “He helped me organize our first board gathering, and for the next two decades, he was a tireless advocate for the cause of open government. He made sure our events were successful and professional; he helped organize our open records surveys and was a vital part of getting our publications out the door.”

Bennett was an instrumental part of the team that created GFAF’s “Blue Book,” Georgia Law Enforcement and the Open Records Act: A Law Enforcement Officer’s Guide To Open Records in Georgia. He also helped create the foundation’s first website and launched our digital communications outreach.

“I will miss Tom and will always be grateful he answered the call when I asked him to get involved,” Post said.

Retired GFAF board member Carolyn Carlson recalled working with Bennett on the foundation’s annual fundraiser, the Charles L. Weltner Freedom of Information Award Banquet, which he chaired for many years.

“As the dinner date approached, we would meet regularly at Mary Mac’s Tea Room to make sure everything was on track for the big event,” Carlson said. “So whenever I think of Tom, I think of Mary Mac’s great food, too.”

During Bennett’s 23 years at the Atlanta Journal-Constitution, he led open-government surveys in Georgia and Alabama and launched a newsletter that covered freedom-of-information surveys across 26 states.

His career in Georgia included writing and editing for the AJC, including as a sportswriter, and serving as assistant public relations director for both the Atlanta Braves and the Atlanta Falcons. 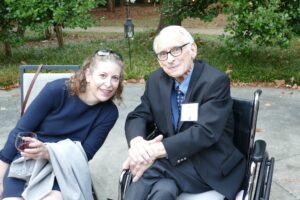 Bennett, who retired in Murphy, N.C., is survived by his wife of 54 years, Lorraine Martin Bennett. She was at his side at many Weltner Banquets, taking part in Bennett’s efforts to promote and expand Georgians’ right to know. Read his full obituary.