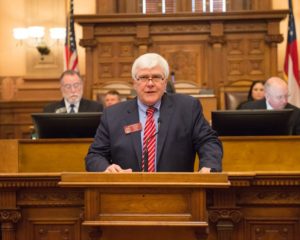 The late Georgia state lawmaker Jay Powell was instrumental in the 2012 update and expansion of Georgia’s Sunshine Laws. Source: Georgia House of Representatives

Powell, an attorney from Camilla, was instrumental to the 2012 update and expansion of Georgia’s Sunshine Laws. He was a sponsor of the bill that improved Georgians’ access to government meetings, proceedings and records, working alongside Sam Olens, then the attorney general, to shepherd the proposal through the legislative process.

The Georgia First Amendment Foundation supported the legislation and partnered with Powell and other state officials to educate lawmakers and the public about the benefits of strengthening Georgia’s government transparency laws.

Commentary co-authored by Powell and Olens, published in the Atlanta Journal-Constitution in March 2012, explained the improvements. “[The legislation] makes clear that final votes have to be taken in public, including on real estate transactions. It clarifies and streamlines how government officials must respond to a request. It lowers the cost of records from 25 cents to 10 cents a page. It enables government to act more efficiently by permitting certain meetings by teleconference in emergency situations. It requires minutes in closed meetings with review by a court when a challenge is filed. And it provides the teeth needed to enforce the law by allowing us to bring civil or criminal actions against violators with increased fines so that they serve as a meaningful deterrent instead of just a slap on the wrist.”

This year, for the first time ever, an alleged violation of Georgia’s Open Records Act led to criminal charges—demonstrating those “teeth” in the law.

The Sunshine Law updates Powell championed are reflected in the foundation’s recently updated Red Book, Sunshine Laws: A Guide to Open Government in Georgia. Learn more about Powell’s career and legacy in articles published in the AJC and Albany Herald.