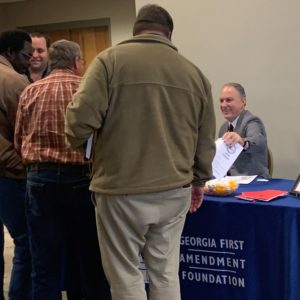 More than 100 officials from over 60 cities attended the GMA event, which was held at the University of Georgia Tifton Campus Conference Center.

“Freshman city officials from all around the state—St. Marys, Walnut Grove, Columbus, Lawrenceville, Blackshear, Fitzgerald, Poulan, Lake City, Ashburn, Hoschton—and several other cities came by to talk,” Zachary said. “They are energized about entering public service and conscientious about the need to conduct the public’s business out in the open.”

The foundation offers open records and meetings training to public officials around the state and encourages government agencies and individual elected officials to join the organization to access resources and support the principles of government transparency. Learn more at gfaf.org or to by emailing info@gfaf.org.